SNOW.GE - Winter vacation in the mountains of Georgia
Sei qui Home » Vacation on the Ski resorts in Georgia. » News from the Ski Resorts in Georgia » Snowy Georgia - the discovery of the last decade

Snowy Georgia - the discovery of the last decade 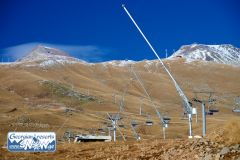 Until recently, most skiers and snowboarders have never heard that there are good skiing possibilities and modern ski resorts and infrastructure in Georgia. This country was more associated with the sun, the warmth, the vineyards, the sea and tangerines. Now, thanks to the development and construction of modern resorts in the mountains, Georgia attracts even the most discerning "hunters for the snow" - skiers, snowboarders and ski tourists. And the slogan "Sunny Georgia" until recently sounded the same realistic as the new epithet "Snowy Georgia", which was born just in the last decade.

The decisive role in the opening of the ski potential of Georgia for the mass tourist, belongs to the State, which committed to the development and popularization of ski resorts in the country since 2005.